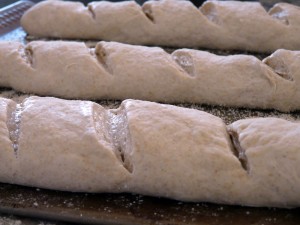 With Natural Yeast Baguette #4, I wanted to play with the amount of yeast again and increase the (sourdough) starter to produce more flavor. It had a better developed crust, same soft crumb, and good oven rise. The crust was a step closer to the French Boulangerie’s Tradition that I am trying to mimic and the flavor is much more pronounced.

This recipe should be a 65% mixture. I made my dough, kneading until it reached 85 F internal and let rise in the refrigerator for overnight. The next day, I divided the dough into boules and let rise 60 min. I shaped into batards and proofed for 30 minutes rise at room temperature. I then shaped them into baguettes, scored, and put them directly in the oven.

I set my oven to 520 F for baking hearth-style on a baking pan. I changed the heat to 475 F after 10 minutes and baked another 15 minutes.

These were awesome, but the crust could still use improvement. My next round will most likely not include commercial yeast at all. The retarded rise and higher heat seems to add a lot to the flavor and crust. 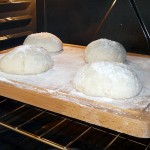 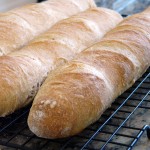 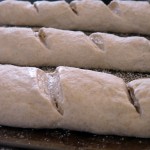